NB: This is an in-person event but the venue is still to be confirmed.

We are thrilled to be able to bring you this exciting and motivational event with special guest speaker, Sarah-Jane Perry, professional Squash player.

Sarah will be exploring: 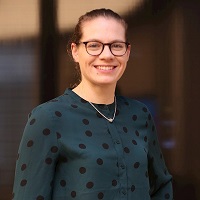 Sarah-Jane currently holds the World no. 5 and British no 1 ranking is at the forefront of Squash in England, having been an established member of the national team for a number of years. She has also won three British National Titles. She is known for her unequaled attacking play, creativity, and her never-say-die attitude on court. She has played professional squash since graduating from University in 2011.

Sarah-Jane has cemented her place as one of the contenders for the biggest titles on the professional World tour. This has included multiple wins against World top 3 opponents, victory at the Blackball Open in Egypt in December 2020, winning two British Championships, 3 World Championships Quarter Finals and numerous other finals. She also overcame a serious elbow injury, which required surgery, to make the later rounds of the World Championships in Chicago in February 2019.

Her aspirations are to win gold at Birmingham 2022, to become World Number 1 and World Champion as well as driving the game of Squash and Women’s Sports forward. 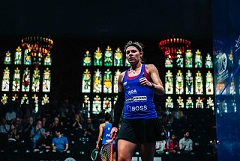 She is an active member of the PSA (Professional Squash Association)  as Women’s President and Board Member, committed to ensuring the voices of all players are represented and heard.  Her enthusiasm for squash is infectious and can be seen on and off court as a Trustee of the PSA Foundation as well as Athlete Advisory Committee Member for the Commonwealth Games in Birmingham 2022.  Sarah-Jane is actively involved in the LGBT community, and speaks at corporate and networking events on Equality Diversity and Inclusion, developing resilience, overcoming adversity, and goal setting.

Member: tickets are free, however, have the option of making a donation to Wellbeing of Women (WOW) by choosing one of the Member 'donation' tickets. 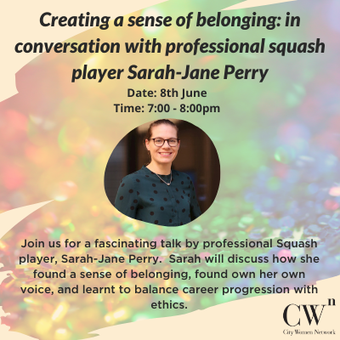