We have some great news about our Summer Soiree. As we are still in partial lockdown we won’t be able to meet in person on the 15th July as planned, but we have an exciting alternative! We are delighted to announce that English opera singer Lucy Crowe can join us for an evening of conversation rounded off with an exclusive  performance just for us.  Whilst we can’t provide the drinks on the evening we do hope you’ll join us and raise a glass to celebrate summer.

Lucy was born in Staffordshire and realised at a very early age that she wanted to become an opera singer. She studied at the Royal Academy of Music where she is now a Fellow. As a child it was her dream to sing at the ROH Covent Garden and she has since performed 8 lead roles there, all to critical acclaim; Belinda (Dido and Aeneas) in 2009 and has since sung Sophie (Der Rosenkavalier), Gilda (Rigoletto), Susanna (Le nozze di Figaro), Adina (L’elisir d’amore), Eurydice (Orphée et Eurydice) Ismene (Mitridate, re di Ponto) and Poppea (Agrippina).

In America Lucy made her debut at Chicago Lyric Opera as Iole (Hercules) which she then performed in Toronto for Canadian Opera. She has performed Adele (Die Fledermaus) and Servilia (La clemenza di Tito) for the Metropolitan Opera, New York, where she is due to sing Susanna and Pamina next season. She has also sung Donna Elvira (Don Giovanni) on tour to New York, Paris, Hamburg, Basel and Edinburgh.

She is a prolific recitalist and concert performer and has performed at all the major concert halls with conductors including Gustavo Dudamel, Sir John Eliot Gardiner, Emannuelle Haïm, Andris Nelsons, Yannick Nezet-Seguin and Sir Simon Rattle.

She can also be heard on many recordings with repertoire ranging from Handel to Lutoslawski.

Lucy was the first classical singer to perform live professionally in lockdown in a recital at the Wigmore Hall with pianist Anna Tilbrook. This was broadcast live on BBC Radio 3.

She has been performing classical, pop and rock music for her neighbours every night in lockdown with her husband Joe Walters (banishing the assumption that opera singers can’t sing anything other than opera!)

Members: tickets are free, however you have the option of making a donation to WOW by choosing the Member 'donation' ticket. 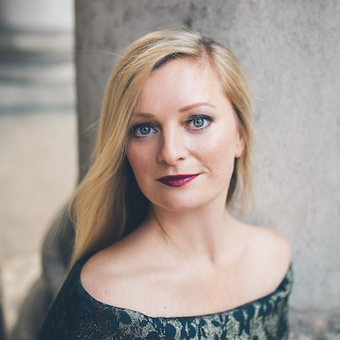